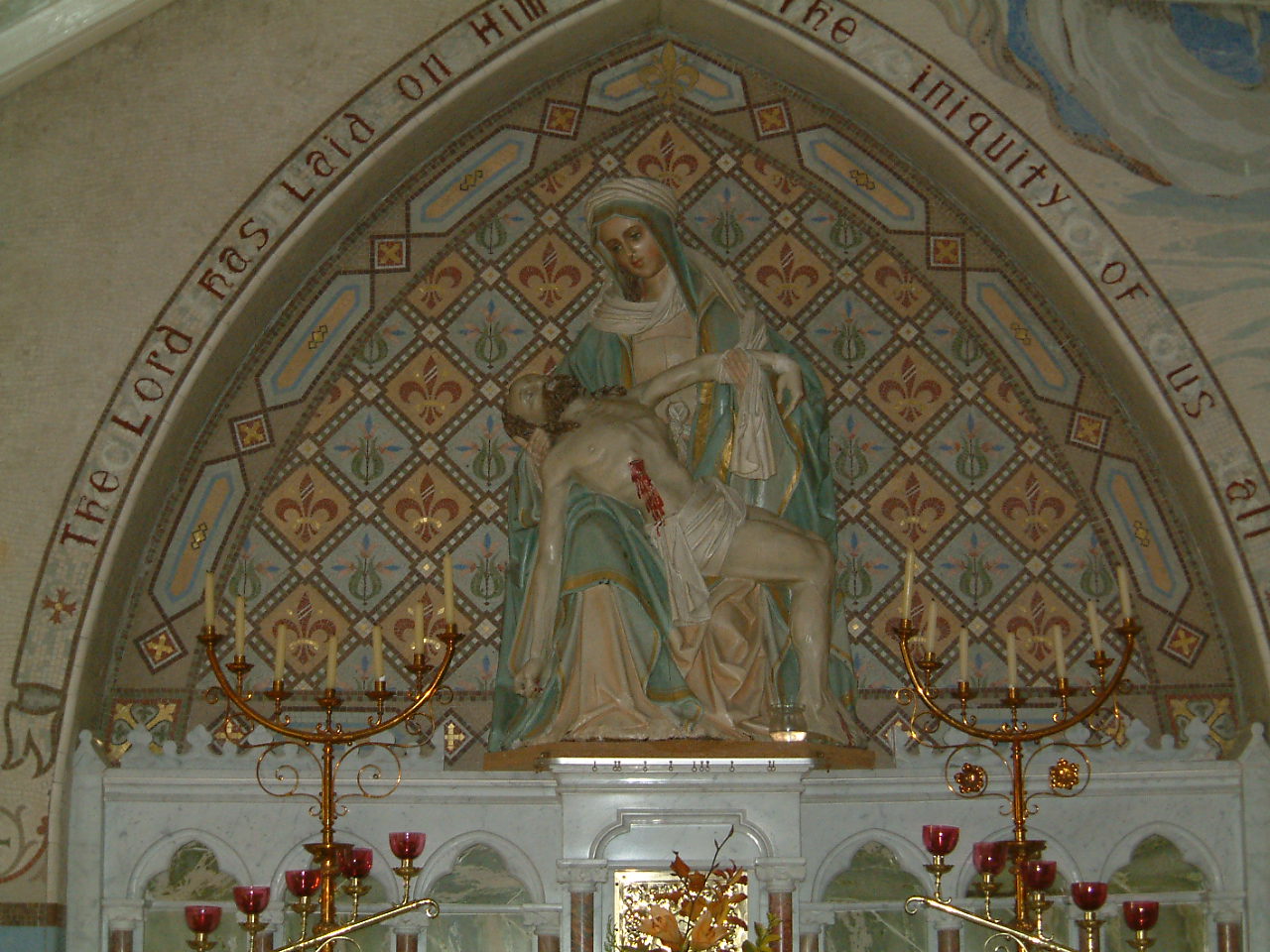 The Church of the Blessed Virgin Mary, Kilcormac, is the home of the beautiful Kilcormac Pieta, which dates all the way back to the 16th century. This exquisite statue depicts Our Lady holding the body of Jesus after he had been taken from the Cross following his crucifixion. The scene was a very popular subject for sculptors in the Middle Ages in Europe and the most famous one, that exists to this day, is by Michelangelo in St. Peter’s. The Kilcormac “Pieta”, however, is different; being carved from a block of solid oak and measuring five feet by three. It is a very beautiful carving, and is believed to be the only one of its kind and era in Ireland. It is a subject of great devotion in the area and the wonderful story of its survival, which was passed on by word of mouth for generations, was finally written down by the former parish priest of Kilcormac, the late Father Andrew Shaw.

It is thought that the Pieta is of Spanish origin and according to tradition it was donated to the parish by a rich lady in the 16th century. It was placed in the parish church, which at that time was in Ballyboy, about 1 mile from Kilcormac. There it remained until one day in 1650, when Oliver Cromwell’s army was reportedly approaching from the direction of Cadamstown.

Upon hearing this news, everyone gathered up their belongings and prepared to flee to the woods, when two women thought of the Pieta. They rushed to the church, took the Pieta outside and buried it in a heap of rubbish. Later, in the dark of night, a number of men came back into the town and brought the beloved statue out from under the heap of rubbish and reburied it in a bog, where it was to lie for over sixty years. This brilliant combination of quick thinking and courageousness demonstrated by the townspeople, most likely ensured the survival of the Pieta, saving it from the same fate as the churches of Kilcormac and Ballyboy, which were reduced to ruins during those years of persecution.

It is thought that sometime between 1700 and 1720, only one man was left alive that knew where the Pieta was buried, and according to tradition, he was carried on his deathbed to point out the statue’s secret hiding place. The carving was carefully recovered and, upon examination, was found to be in perfect condition, impeccably preserved by the bog. It was then placed in the church that had recently been built in Kilcormac, the whole parish was overjoyed to have their valued Pieta among them again.

It almost left the parish some years after that when a priest, who was moving to Borrisokane, took it with him! However the parishioners brought it back and it has remained in the parish church of Kilcormac to this day.